The complete guide to: the Italian Riviera 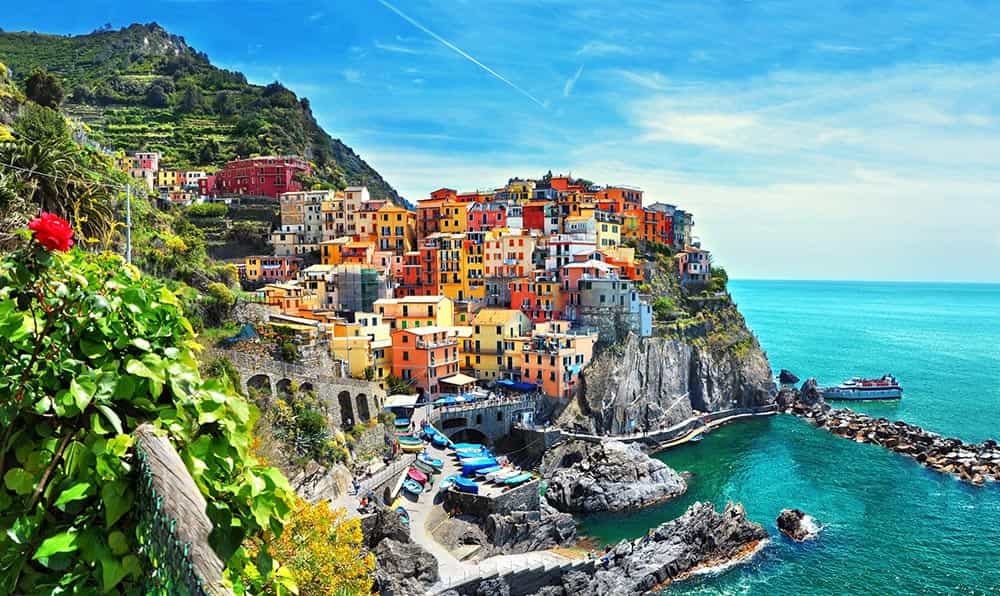 The colour-splashed Ligurian coast packs in spectacular scenery and history and has been luring tourists and stars since the time of Byron and Shelley.

And more. The Italian Riviera is essentially another name for the coast of Liguria, one of the country’s smallest but most intriguing regions, lying to the west above Italy’s great boot. Resonating with style and charm, this sweeping shore curves between France’s Côte d’Azur and Tuscany. Its beaches border sparkling blue waters, its seaside towns for the most part exude an atmosphere of old-world ritziness. The Italian Riviera is steeped, too, in literary appeal. Byron and Shelley were smitten by the Gulf of La Spezia to the east, and Lerici Bay was renamed The Gulf of Poets in their honour. DH Lawrence lived in the fishing village of Fiascherino nearby, while Ernest Hemingway and Ezra Pound stayed at Rapallo further west.

The narrow arc of the Riviera is vertiginously backed by the Maritime Alps, and along this well-sheltered strip of land there is an exceptionally mild microclimate. It is arguably the prettiest, most flower-filled stretch of Italian coast.

Punctuated more-or-less in the middle by the historic city of Genoa, it is a shoreline very much of two halves. The western sector is known as the Riviera di Ponente, the coast of the setting sun, and has relatively wide beaches and lush landscapes. The eastern Riviera di Levante is more weathered and offers areas of wild and craggy drama.

That depends on what you’re after. Go east for spectacular scenery and for glamour. But if you want great weather and beach action, head to the Riviera di Ponente. It is sub-divided into two stretches. Westernmost, the Riviera dei Fiori is so-called because of the flower-growing industry in the area. Highlights here include the attractive little town of Ventimiglia with its pebble beach and lively Friday market – excellent for leather bags and belts, though there are frequent crackdowns on the counterfeit goods trade. West of Ventimiglia lie the dreamy Hanbury Botanical Gardens, a haven of exotic plants founded in 1867.

For sandy shores and classic good looks make for the old-world resort of San Remo, east of Ventimiglia, to discover splendid 19th-century villas, a casino dating from 1904 and a maze of a medieval old town. San Remo’s Royal Hotel, inaugurated in 1872, offers a blend of nostalgic grandeur and modern comfort.

East again, you reach olive country around the town of Imperia, an amalgam of two old ports, while beyond lies Diano Marina with a long sandy beach and a cheerful summer buzz.

Stretching up from the Capo Mele to Genoa, the Riviera delle Palme is characterised by its vegetation and sunny, seaside attractions.

The beach resort of Finale Ligure developed from three colourful towns and presents a 12th-century abbey, a medieval old town and a lively seaside neighbourhood. Meanwhile the small city of Savona (the second largest urban centre in Liguria) is a serious working port with a picturesque old harbour dominated by medieval towers.

You’ll find stunning architecture and a wealth of paintings at the curiously unsung city of Genoa (known locally as Genova). Italy’s chief port, it exudes a gritty, no-nonsense air yet beyond the docks and warehouses of its large harbour lie ornate palazzi, fine churches and one of the largest medieval old towns in Europe (albeit extensively restored after damage in the Second World War). This was the city that Petrarch called “La Superba” on account of its majesty. And the old town has stayed untouched by the new.

The city’s most notable sight is Via Garibaldi, a 16th-century millionaires’ row lined with magnificent town palaces. Many of these fabulous properties now house banks, so if you’re visiting during the week you’ll be able to take a look inside some of the courtyards and frescoed lobbies.

Avoid coming on a Monday, though, which is when the outstanding Museo di Strada Nuova is closed. This extensive art gallery comprises three of the most beautiful palazzi of Via Garibaldi and contains paintings by Durer, van Dyck, Caravaggio, Rubens and more.

Other must-see attractions include the colourful covered market, set in the former cloisters of an 18th-century church on Via XX Settembre; and the black-and-white striped cathedral, Duomo di San Lorenzo, which dates from the 12th century and contains a series of ornate chapels – the Renaissance Capella di San Giovanni Battista is especially fine.

The jewel of the Italian Riviera is the sumptuous fishing village of Portofino, east of Genoa. Amazingly little has changed from the Sixties when Elizabeth Taylor, Ava Gardner and Frank Sinatra were among those holidaying there. It sits on a rocky promontory, its cluster of ochre and pink buildings backed by hills clad in pines, palms, azaleas and cypresses.

Dotted among this greenery are the beautifully positioned villas of many of northern Italy’s wealthy elite. Yet although you’ll find outlets of Gucci, Pucci, Hermès and Louis Vuitton, this is not a self-consciously showy place.

Local residents (who number about 750) say that for most summer visitors see-and-be-seen considerations are usually eclipsed by the charm and the exquisite outlook here. You can even see dolphins, who frequently romp in the clear waters just beyond the village.

Filled with summer yachts and the odd fishing boat and fringed with cafes and restaurants, the harbour is the little hub of village life. But despite Portofino’s small size there are several other attractions. Brick-lined paths in the slopes above the harbour wind you through much flowery vegetation to the pretty church of San Giorgio, up to the Castello Brown, a fortress dating from the 16th century, and over to an old lighthouse.

Best of all, though, is Museo del Parco, a terraced sculpture garden overlooking the harbour and filled with modern artworks.

One of Italy’s finest hotels is set in a former monastery just above the village. Complete with fabulous views and heated saltwater infinity pool, the Hotel Splendido offers doubles at an eyewatering €880 per night – including breakfast.

Consider staying at the elegant old resort of Santa Margherita Ligure. With its esplanade, opulent villas and orange trees, the town provides a stylish alternative to its more celebrated neighbour. You can reach Portofino, 7km along the coast, via a twisting road (much tooting around corners, and – in high season, queuing – required). More pleasantly, a boat connects the towns with others along the coast.

Santa Margherita Ligure’s most styling location is the Grand Hotel Miramare, which presents a gracious atmosphere in keeping with its splendid 1903 looks and magnificent sea views.

Kirker Holidays offers three nights at this five-star haven from £808 per person, including breakfast, based on two sharing. This mid-season price includes flights to Genoa (from Gatwick) or to Pisa (from a variety of UK airports) and car hire.

Alternatively, make for Rapallo, just a few kilometres further east. This pretty seaside town offers a beach, two harbours and a little castle set in the water, as well as several majestic hotel choices. Among them is the Grand Hotel Bristol, dating back to 1908.

For a real treat visit the ruggedly beautiful Cinque Terre, or “Five Lands”, an 18km stretch of astonishingly serrated coastline that is home to the five old fishing villages of Monerosso al Mare, Vernazza, Corniglia, Manarola and Riomaggiore

Built on sheer cliffs above turquoise waters, these clutches of brightly coloured houses are minor miracles of ancient engineering and building dexterity, with the steep land around stunningly etched into terraces of vineyards and tiny fields. For centuries this area was extremely isolated – the railway line here, completed in 1874, provided the first motorised land connection between Cinque Terre and the outside world. Today it is conserved as a national park and a marine park, with the villages linked by a regular train service and remaining largely traffic-free.

Accommodation is mainly in village B&Bs and small apartments, at which between May and September you can expect to pay from €75 for a double room or studio.

A list of places to stay, officially approved by the park authorities, is available at the information offices at each village’s railway station, with the main visitor centre located at Riomaggiore. In any event, you’ll need to buy a Cinque Terre card from one of the park centres if you want to use any of the hiking trails that criss-cross this spectacular district. A one-day card costs €5 (with permutations for families and additional rail and ferry tickets), the proceeds being channelled into the conservation and maintenance of this unique area.

Give me more action

Other walking opportunities include the network of trails in Parco Beigua on the west coast. It is the largest of such protected areas in Liguria, with silent forests, wonderful views out to sea, and a principal visitor centre at Arenzano.

Over on the east coast, the Portofino Peninsula lies above the eponymous village. It is a breathtaking reserve crossed by a number of footpaths. Short break and walking holiday specialist Inntravel offers a seven-day hiking trip that starts here and takes in the wonderful Romanesque abbey of San Fruttuoso and the small resort of Diva Marino before reaching the dramatic landscape of Cinque Terre.

Alternatively take a guided day hike in the area: Walking Liguria offers a variety of options from challenging mountain hikes to gastro walks.

How do I get there – and around?

Genoa is the most convenient international gateway from the UK. It is served by British Airways from Gatwick, and by Ryanair from Stansted.

Getting around couldn’t be easier, with trains probably the best option. The main railway lines more or less hug the coast all the way around the Riviera. Take the inexpensive, ambling Regionale trains to reach small stations, or the faster (and more costly) Eurocity (EC) or Intercity (IC) services between towns. For timetables and more information visit trenitalia.it. Buses run frequently between towns, and are slightly more expensive than trains. For details visit rivieratrasporti.it .

Where can I find out more?

The cuisine in Liguria is exceptionally good, with a remit ranging from seafood to porcini and pasta. Local specialities include olive oil from Imperia, anchovies and dry white wine from Cinque Terre (the wine takes the same name), and perhaps best of all, pesto from Genoa. The Genoese devised this heavenly blend to prevent scurvy among sailors.

Not just the green sauce made from crushed basil leaves, pine nuts, pecorino cheese and olive oil but also red and ‘white’ varieties respectively made with sundried tomatoes or artichokes. Pasta specialists sell slabs of takeaway lasagne doused in pesto for a couple of euros.

Genoa is also renowned for its breads and pastries: focaccia, farinata (a pancake made with chickpea flour), pandolce cake with candied peel, raisons and nuts, and gobelletti biscuits with fig jam.

BY HENRY PALMER – THE INDEPENDENT

Liguria, + 9% of requests for real estate by foreigners 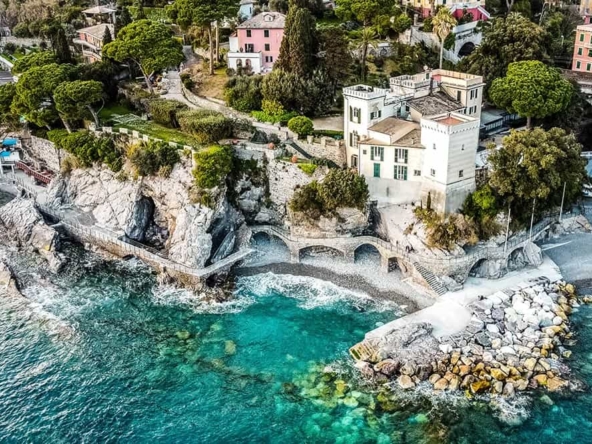 Where to buy castles in Italy?

If you're dreaming of a luxury property with an aristocratic touch, an Italian castle just might be...
Continue reading 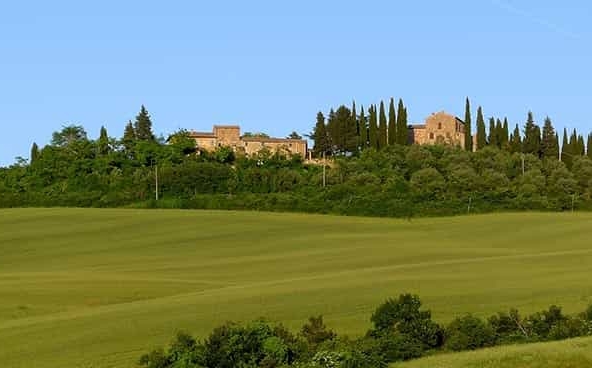 Italy, + 30% of requests for luxury property due to “flat tax”

The demand for luxury properties is growing: from Milan to Lake Como, Liguria to Tuscany and Rome,...
Continue reading 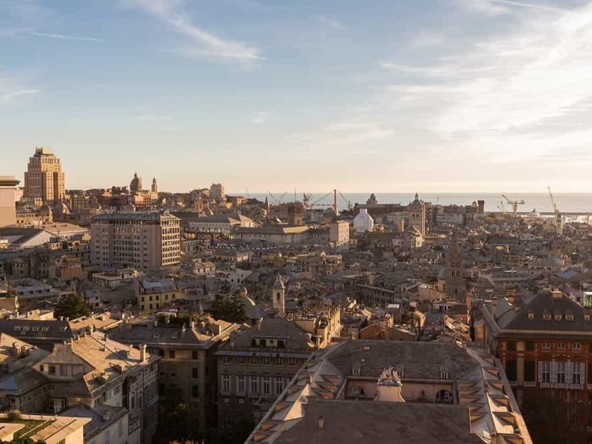 While you probably don’t head to Italy’s major art cities to go to the beach, with many of them...
Continue reading

Please enter your username or email address. You will receive a link to create a new password via email.